Finding God in the whole of creation especially in men and women.

Serving faith -being contemplatives in action and helping others find God.

Discernment -what does God desire for the world and how can we align ourselves with His mission and His will?

Living in solidarity with those who are poorest and on the margins of our societies.

Being in dialogue with people and cultures.

Spirituality means different things to different people, even within the same tradition and religion. One possible working, albeit rather generic, definition of Christian spirituality is life in the Spirit, or a life lived following the Spirit of God. Even within the Christian tradition there are different spiritualities and Ignatian Spirituality is one of them: the one inspired by the experience of St Ignatius of Loyola (1491-1556), the founder of the Jesuits.
What is Spirituality? There are many definitions of spirituality, but we’re mainly concerned with Christian spirituality. We may summarise what we intend with this term by saying that it is:
• A fundamental human dimension
• Openness to the ultimate realities that are beyond us
• Following Jesus Christ
• In a community of believers. 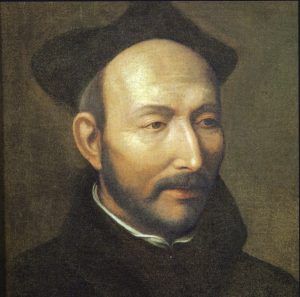 Ignatius’ spirituality started with a cannon ball breaking his leg in battle. After a period fighting for his life, he was forced to stay in bed for a long period of time and this gave him the opportunity to be more attentive to what was happening inside of him. Two different trains of thought got hold of him, one inspired by his previous dreams of fame and worldly glory and the other came from the books he was reading about the Life of Christ and those of the Saints, which suggested to him, choosing Christ as his King and following Him. Both sets of thoughts would fill him with enthusiasm, but while the worldly projects would leave a certain emptiness in him when he stopped thinking, thoughts of following Christ would leave a deep peace in his heart. He became aware of this difference and from then on he decided to change his life. More importantly, he became more attentive to the interior stirrings coming from the Spirit of God.
Ignatius also realised, later on, that God’s Spirit talks to us through what happens in the world around us, even if it meant going against what we may strongly feel about inside us. When he went to Jerusalem as a pilgrim, he was determined to stay there to do missionary work, but those in charge of the mission in the Holy Land prevented him from staying on for a variety of valid reasons. His inner stirrings met with insurmountable external obstacles. He realised that God is at work in the world, imperfect as it is, and also talks to us through circumstances and what happens around us.

God has a “new” address

One fundamental characteristic of any Christian Spirituality is that our God is an incarnated One. He became man in the person of Jesus of Nazareth and remains at work through human beings in the here and now. God moved home, so to speak. He’s at work in the world’s history and can be found in and around us. Our God is a God who loves us,  yearns to be with us and share in our experiences of joy and sorrow, while wanting to share with us his Life.

Finding God in daily life and in the world

Like Ignatius, we too can find God in our everyday lives. Although we can find Him in church, we can also find him outside of it. He can be found in Creation, be it a beautiful sunset, a flower or a butterfly and, more importantly, in human beings. Thus, God is also present in us through our thoughts, feelings and desires. Furthermore, He talks to us through all of this and invites us to bind our lives to His.

When the Christian makes decisions he or she needs to base them on the Gospel. However, like Ignatius, we need to listen to what God is telling us in the here and now, that is, through what is happening in the world around us and also through our interior movements. Ignatius would take notes of what helped him both in his prayer and in his decision-making and, also, what he found useful to those he accompanied. Eventually, these notes became the Spiritual Exercises of St Ignatius.

The Spiritual Exercises are a process, through which the person doing them, searches and finds God in her life. This search produces order in the life of the person and then helps her to find God’s will for her. In other words, the person finds a direction towards their fulfilment and their service to others.
This programme of prayer is done with the help of a trained guide who accompanies the person along the itinerary of the Exercises, which can take various forms. When done in retreat form, the Exercises take 30 days, but they can also be done in daily life, over a period of several months. There are other adaptations of the Exercises to fit the needs of the person wishing to do them.

The Spiritual Exercises include a number of methods of prayer, together with suggestions on how to pray better. One method, characteristic of the Exercises, is Ignatian Contemplation, where the person praying uses the faculty of imagination to become present to a passage from the Gospel. A form of prayer that summarises what the Exercises are about, is the Examen. Here one looks at what happened during the day and searches for God’s “fingerprints” to orient himself based on God’s work in and around him.

“A faith that does justice”

Ignatian Spirituality is not only for retreat houses. In deepening our relationship with God, we commit ourselves to bring justice in the world in concrete ways. “Love ought to be put more in deeds than in words”, says St Ignatius in the contemplation to gain love. Our faith and spirituality make us more compassionate towards the poor and the marginalised. They urge us to commit ourselves, for example, to: